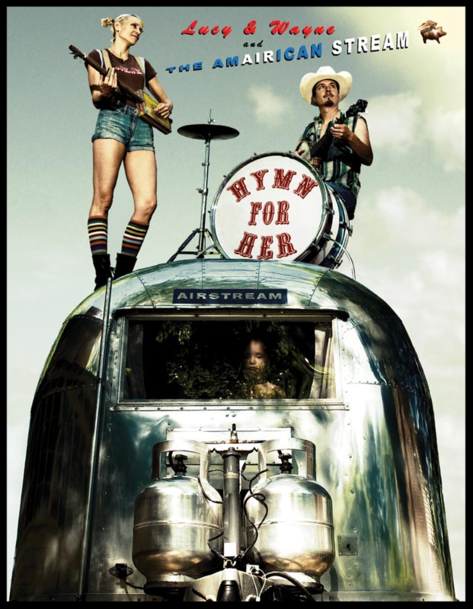 Their 2017 album release, “Drive Til U Die” charted in the top 5 for Americana Releases on radio, and also in the top 5 for Blues. They are a bit of those two elements along with bluegrass, folk, and psychedelic rock and roll. Last summer they toured the UK/Germany/France/Austria for 3 months playing festivals including Glastonbury and many others. They’re returning Overseas this summer playing many festivals and venues again for 3 months but will return to the US to promote a new release recorded with Grammy winner, Vance Powell, that comes out early September, working with Cary Baker at Conqueroo for Publicity.

Impressively, the two create their “ripsaw sounds” (Los Angeles Times’ Randy Lewis) with only a few instruments. Wayne (with the devilish voice), mainly playing the kick-drum, high-hat, acoustic guitar and harp, serves as the group’s rhythmic driving force. Lucy (of the fallen-angel voice) delivers a gritty squall on her “Lowebow” — a custom-made cigar-box guitar: “The Riff Monster.”Catch this duo as they burn down the highway and tear up your town like a Wichita twister.

Some press quotes for Hymn for Her's release,

'Drive Til U Die'

​
AXS- "If you find yourself complaining about the homogenization of rock and roll, Americana, country or folk music, then 'Drive Til U Die' is the cure for what ails you."

Country Standard Time- "It's one hell if a ride."

Atlanta Auditory- "Their sound is original and cannot be classified by a single musical category as the freewheeling spirit they live life by bleeds into the music."

Popshifter- "Together, they make quite a sound...It’s road music, it’s rootsy punk rock, it’s the beating heart of America."

"Drive Til U Die is already solidly entrenched in my Top Five of this year. It is that good."

Insite Atlanta-
"The record rolls out a fine slab of songs to soundtrack any summer road trip. Like a trip to a favorite destination, Hymn For Her's latest rollicking ride is worth more than a few return visits." 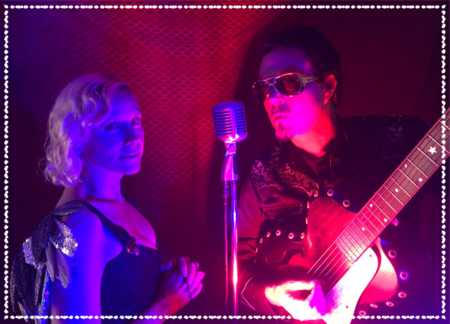 Hymn For Her smash through the highway guardrails and land in a carnival on a hot air balloon. Float away with them on their new release, ‘Pop-N-Downers’ available October 5th, 2018.

SWAMPVILLE, Florida — Ever since Lucy Tight and Wayne Waxing joined their romantic and musical fortunes together, hooked their home to a trailer hitch and drove off to look for as many of America’s music-loving pockets as they could find, the duo known as Hymn for Her has been living many adventures, one stop at a time.Their red-hot blend of roots music — and ferocious live shows — have also carried them to locales around the globe, attracting fans everywhere they go.With Pop-N-Downers (out on October 5, 2018), they’re ready to reach even more.

Their troubadour lifestyle has provided creative inspiration for several albums, earning the dynamic duoattention from a variety of roots radio stations and international music festivals. This new set of songs is seemingly inspired by travels far beyond America’s shores. “We never have an intent for where the music goes,” says Lucy. “Songs definitely forge their own path each time we record.”

Mingling textures and tones far removed from the “hayride to hellsy” twang-rock blast of their 2016 release, Drive Til U Die, the songs on Pop-N-Downers simultaneously exude sophistication and a charming, childlike whimsy. A colorful Tropicália vibefloats through several of these tunes, imbuing them with a lightness of being even when the lyrics turn heavy.

The album unfolds with the lush, full sound of “Blue Balloons,” which evokes Sgt. Pepper’s in its sweet harmonies, theatrical presence and pointed lyrics. “’Blue Balloons’ gets its life from the joy and sorrow we experience on our travels,” Lucy says. “We hope future generations can find the beauty in a world spinning out of control."

They’ve searched for beauty in many exotic spots, including the Mediterranean coast, which inspired the Spanish-flavored “Roses.” “We were busking in the streets with our baby daughter strapped to our back, wondering if this would be a good place to live,” Lucy recalls. “We're always open to change.”

“Dingle Town,” influenced by Hymn for Her’s recent tour of Ireland, slams together the drone of bluegrass and Celtic modalities with blues harmonica, crunchy guitar, handclaps, foot stomps, “bang-o” (a drummed-upon banjo) and whatever else they could wedge into its sonic soundscapes. Lucy plays banjo/bang-o and cigar-box guitar simultaneously on this one.
Echoes of Brazilian chanteuse Astrud Gilberto can be heard in Lucy’s bossa-nova-inflected scat singing on the earthy love song “November.” Ipanema’s beaches might come to mind in “Auf Wiedersehen” as the pair’s vocals glide breezily over waves of vibraphone and acoustic guitar. When it came to recording the album, Wayne says, “We gave ourselves leeway to add a variety of instruments in the studio that we don’t usually play at shows.”

The path to Pop-N-Downers starts in Swampville, Florida, where Lucy and Wayne park their Bambi Airstream/mobile recording studio whenever they need to plot their next course. That’s where the co-producing couple recorded song demos before heading to Nashville to reunite with Grammy-winning producer Vance Powell (Chris Stapleton, Sturgill Simpson, Jack White), who helmed much of Drive Til U Die, at his Sputnik Sound Studio.

The album’s character might be best summarized with a description of its sixth track, “Fireflies,” a lovely, sunny-sounding mid-tempo ballad — with a bite. A similarly airy feel permeates “Shallow Graves,” contrasting directly with the disturbing events to which it alludes In “Human Condition,” inspired by Bob Dylan on his Theme Time Radio Hour quoting Thomas Fuller, Hymn for Her’s vocals harmonize with a funky, blues ’n’ rockabilly romp: “You’re born crying/you live complaining/and you die disappointed.”
Then there’s “Scoop,” a lighthearted little groover written in the Sputnik Studio lounge at the last minute. The sessions had just ended, so they recorded it back home at Bambi Studios. Their daughter Diver and her friends chime in on the catchy choruses. Diver also plays the mournful violin heard on the gentle, sadly moving “Yard Sale.” And she directly inspired “First Clown on the Moon,” a lively, banjo-driven song about love and joy that mashes Barnum & Bailey together with dream pop.

“Her very first career choice was to be the first ballerina on the moon,” Lucy explains. “A day later, she changed it to first clown on the moon.” (Her grandfather’s fanciful illustration of Diver’s lunar landing appears on the album’s inner sleeve.) When she was much younger, she covered “It’s Only a Paper Moon,” an unlisted 12th track on Drive Til U Die, recorded in the direct-to-acetate booth at Jack White’s Third Man Records in Nashville.

Just as they freely blend styles, H4H also like to make lyrical leaps, jumping from macro worldview to their own intimate, private universe with the ease of trapeze artists. (Maybe that explains the back-cover image of Lucy — also known on social media as @TourinYogi — playing ukulele while doing a full split as a guitar-plucking Wayne hops over her.) A careful listen to “First Clown on the Moon” reveals references to the album’s title and mood inside the lines, “It’s not always what it seems/these rollercoaster dreams. Don’t mean to pop your balloon/I’ll be comin’ down soon.”=

But even when they address the “downer” aspects of our human condition, Hymn for Her leaven those messages with buoyant balloons, reminding us we can still dance with the fireflies and smell the roses ... thorns and all. 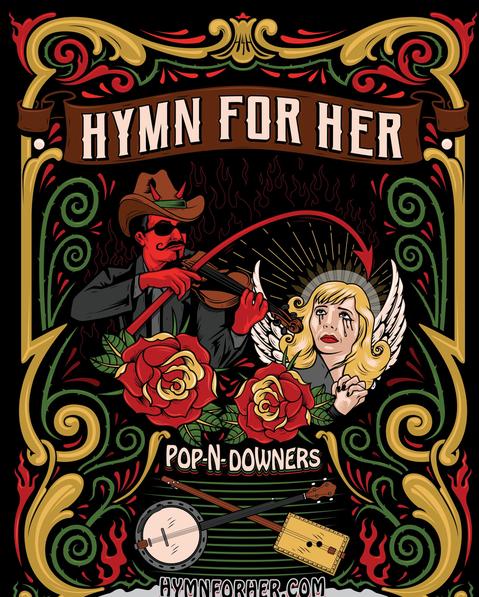